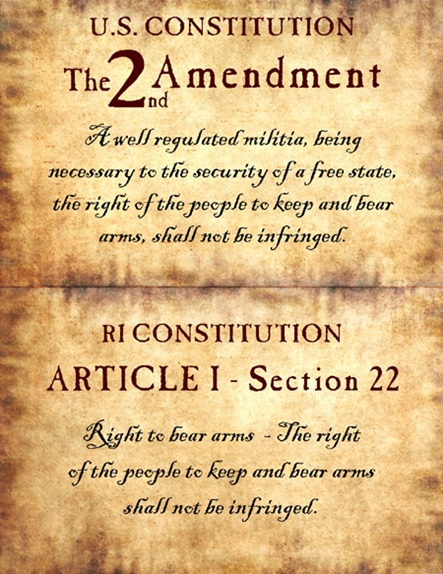 Rhode Island has gone through several periods in our history when the sportsmen and firearms enthusiasts have had their rights threatened by the very people we've elected to represent us in the State House of Representatives, and the State Senate. The past several years have been relatively calm as it pertains to attacks on the rights that protect our freedom to keep and bear arms, but that has changed - and changed very quickly. Recent events have struck everyone in our country with sadness and anguish.

Rhode Island has also had a long history of our rights being defended by Rhode Islanders that value our heritage, our history and the freedom that has been fought for and maintained for over 200 years. There are national firearms-rights groups that also have state affiliates and they are responsible for an outstanding record of keeping our 2nd Amendment rights largely intact. There are also other groups that work with the legal aspect of our firearm-related laws. And there are yet other groups that organize sportsmen of every stripe - not just hunters, but hunters, fisherman, trappers and people who simply like to plink cans with their .22 caliber rifle.

Unfortunately, public tragedy often creates a knee-jerk reaction by politicians all over the country. We are witnessing some of the most drastic infringements on our 2nd Amendment since the Clinton era. There are state legislators in Rhode Island who will openly admit that they want to see "All guns made illegal." There are 1st year legislators putting in bills that would seek to have every firearm in Rhode Island registered. They want to stop us from passing the

heritage we enjoy as free Americans down to our children by changing the laws that allow us to teach our children about firearms, and how to use them safely. In-fact, by the time this legislative cycle is through, we have no doubt that there will be proposals for bans on "assault weapons", magazine capacity limitations, and every other sort of restriction they can think of.

So why don't we just let the existing groups do what they've been doing, and let them lobby at the state house? The Rhode Island 2nd Amendment Coalition is in no way looking to "take over" the great work that these existing groups are doing; the Coalition wants to simply bring together Sportsman's Clubs, Sporting Associations, Gun Store Owners and anyone else who values their God-given, Constitutionally-protected right to defend themselves to complement the existing work being done by the other 2nd amendment groups by adding a professional lobbyist who is well-versed in Rhode Island laws, our legislative process, and in-fact is a political professional with experience in our state's legislative system.

As the old expression says; "There are two things you never want to actually see being made - one is sausage, and the other is laws." The Coalition's addition to the list of lobbyists defending our rights is a person who knows how the "sausage" is made and is a former leader in Rhode Island Legislative Politics. A person who knows their way around in the State House. A person who will fight for the gun owners of Rhode Island with all the vigor and dedication we need.

We are a dedicated-mission organization devoted to our cause - as are all the other groups, with the key difference being the specialization of our lobbyist. All of the groups in Rhode Island specialize in various areas and that's what has made our track record of fighting off the attacks so successful, and the 2nd Amendment Coalition is no different. We are looking forward to fighting in the committee hearings, and public rallies along side all of the other patriotic, freedom-loving sportsman and firearms enthusiasts in Rhode Island as well as every other group there is that is dedicated to the same cause.

Make no mistake - our very liberty is in jeopardy at the hands of misinformed, and/or over zealous anti-gun legislators who don't understand or respect the systems put in place through the wisdom of our Founding Fathers. Let's not forget this; without the 2nd Amendment, the entire Constitution is nothing but unenforceable words on paper. The 2nd Amendment is the only thing that separates us from every other country that has confiscated the privately-owned firearms of the public - turning them into "subjects" as opposed to "citizens". This is a fight we cannot afford to lose. This is a fight that we all must take seriously, and we all must do whatever we can to ensure that we win this fight - for the sake of our children, and the generation of Americans and Rhode Islanders to come after them.

"The beauty of  the Second Amendment is that it will not be needed until they try to take it."